For the first time, Quais du Polar festival participates in an event in India, ‘Noir in Mumbai’: a series of events such as debates, discussions et an urban investigation in the Kala Ghoda district.

The international festival Quais du Polar in Lyon, France organizes every year since 2008 a large urban investigation and proposes, in this journey, to explore the city differently, to discover an original story, a tailor-made text mixing richness of writing and singularity of the places covered, while playing with the codes of crime fiction. Participants follow an original route, along which they search for clues scattered in unusual places or in actors’ lines, in order to solve the investigation.

The Institut français of India and the Alliance française of Mumbai are joining forces with the Quais du Polar festival to propose, on the occasion of the Bonjour India operation, an city investigation in Bombay inspired by the Lyon experience. The conception of the investigation is conditioned by the chosen places and the associated partners, as well as the characteristics defined below. The writing of the text of the booklet is entrusted to the crime fiction Indian author, accompanied by the Quais du Polar team. The City Investigation will take place in the Kala Ghoda district.

Christine Steiner, police chief at the anti-terrorist unit, is put aside after a big mistake during the search for a dangerous ar-right-wing militant. Gone to Lyon to clear her mind, she discovers a kind of missing piece to her own story. Is her sudden departure from Leipzig, to search for a certain Wolfgang Sonne – a former officer from the Baader band – , motivated by personal or political reasons ?

It is a collaborative writing project of a crime fiction around a common topic (like a crime) with two characters whose presence rotates with each chapter to take the story forward. This will allow to discuss the differences between the two countries and the stereotypes attributed to them, the idea beeing to better understand each other. The project was given to Max Annas for the German part and to Jérôme Leroy for the French part. They are accompanied by their own traductors. The project started during the summer 2021.

An event centered around Terminus Leipzig took place during Polar Connection on Friday, 1rst april 2022, where the two writers, their editors and translators presented their work. The book was presented to the German public a few weeks before, at the Institut Français in Berlin and Leipzig. 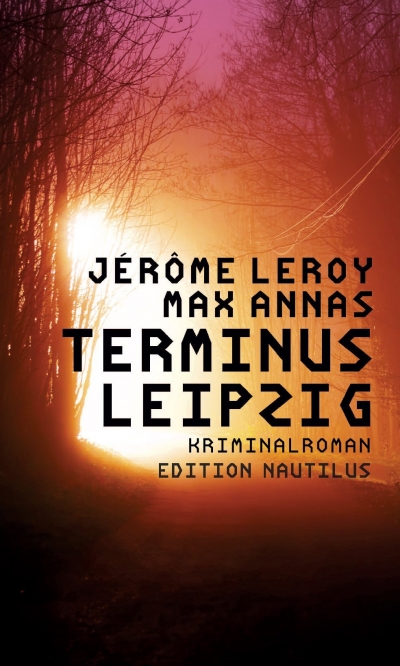 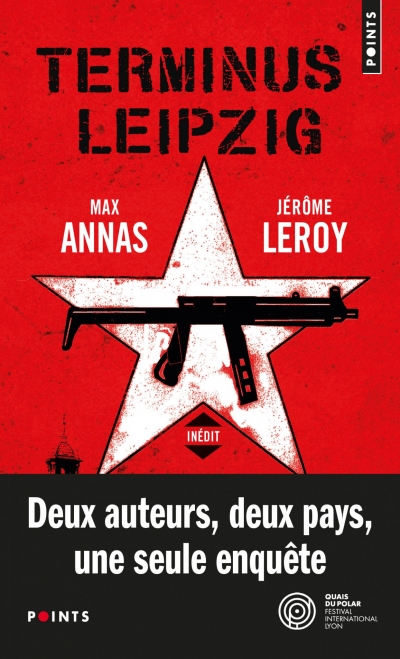 For the fourth year, the Quais du Polar festival and the Institut français organize together in Leipzig, within the context of the city’s Book Fair, an event that aims to highlight French-speaking detective literature writers to the German public. This project will take form in March 2020 as “Krimi à la française”. The project was supported by the city of Lyon, the Lyon Métropole and the city of Leipzig.

More broadly, this operation is the occasion to highlight the French-speaking detective novel writers in Germany via the broadcasting, before the event, to the media but also to the German publishers likely to publish them, of a selection of authors and books still not translated in Germany, in partnership with the Institut français’s Bureau du Livre. Inviting th authors was a collaboration between the editors, based on their current literary activities in Germany.

Quais du Polar and the Institut français , the cultural service of the French embassy, the Korean Publishers Association (KPA) and the Korean Literature Translation Institute (KLTI) collaborated around detective literature for a round-trip between Seoul and Lyon, in order to create bridges between those two countries’ “noir” cultures. Writers and publishers will take the trip.

The Quais du Polar’s City investigation has already inspired investigations in Leipzig or even Palermo, always supported by the festival’s team and loyal to the spirit of the original version.

This time, aspiring detectives will throng Seoul streets in Gangnam neighbourhood, where the SIBF is held, in order to resolve an investigation written by Seo Mi-ae, a very popular detective novels author in Korea, invited to Quais du Polar in April.

In 2019, the France-Romania cultural season was the opportunity for the Quais du Polar festival to contribute to introduce the literary and cinema riches of – and in! – both countries, especially through detective genre. Three projects were organized over past year, in collaboration with Bucharest National Museum of Romanian Literature and the Institut français of Romania.

A collaborative writing project between two young authors, the Romanian Lucian-Dragos Bogdan and the French Jacky Schwartzmann, had begun during 2018 autumn. The publisher Tritonic in Romania and the publisher La Fosse aux Ours in France (more precisely in Lyon!) accompanied the authors in this project, by defining, with the different partners, the format and the topics. The writers chose to start from an actual news item and to write the chapters individually and successively. Le Coffre, an alternation of episodes written by the two of them, was published in June 2019. Available in all fine bookstores!

All details about this four-hand novel here.

During its 15th edition, the festival also programmed a “discovery focus” with Romanian authors who intervened in conferences and film screenings. Several Romanian publishers were also invited to discuss with book and publishing professionals during Polar Connection’s encounters. At last, Quais du Polar accompanied the 1st edition of a new festival dedicated to the “polar” genre, “The Mysteries of Bucharest”, from June 7th to 9th, 2019, with partners of the National Museum of Romanian Literature, the Institut français of Bucharest and the Theatre of Romanian Playwrights. Visitors could enjoy a highlight of French authors invited – Julie Ewa, Johana Gustawsson, Bernard Minier and Jean-Christophe Rufin – noir films screenings, shows, signing sessions, etc.

You can find the whole programme here.